Over this past year myself and many of my cyber safety colleagues, have noticed a marked increase in the numbers of primary school children, some as young as seven years old who claim they are using Snapchat. A teacher at one school I visited told me she believed that one of her Kindergarten children was using Snapchat. This early adoption of adult apps by younger children is of great concern to teachers, parents and cyber safety educators, who also report increased incidents of online bullying and children being exposed to adult content in primary school.

Snapchat is primarily a photo/video message app. Users can upload a photo or video set to “disappear” after  viewing, either to friends/followers or they can post it publicly. Users can also put several videos or photos together and create a story “Your Story” of their day, that friends or followers can see via the app. Snapchat is also a video chat app, and has live video streaming. Although it may seem safer to have each message “disappear” Snapchats video/photos can be saved and shared however with screen capture, iOS11 Screen record feature, or by using another device to record or take a picture of the screen.

Snapchat also has facial filters and playful masks that you overlay on your facial selfies for fun. The Facial masks/filters have become increasingly sophisticated, and with Apples iPhone X 3D Facial scanning they will start to look even more realistic. 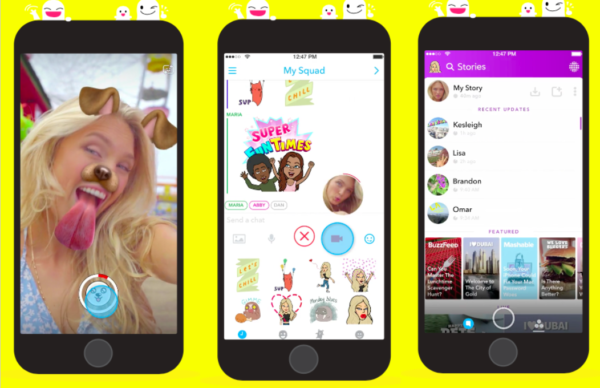 Why are children as young as seven years of age using Snapchat when it is rated 13+?

For the same reason that they are also signing up to Instagram and Musical.ly both rated 13+ at the same age. Their parents either don’t know they have an account, or their parents believe the app is suitable for them at 7, and are ok with ignoring the legal age restrictions.

Many parents tell me, as way of reassurance, that they only let their young child use Snapchat via their account, just for the facial filters, because they are fun!

Snapchats facial filters are one of the cleverest marketing techniques I’ve ever seen in all my years on the internet. For children..(And adults) they are of course hugely popular and fun. They are also a great way to have your young child acclimatised to Snapchat very early on, so that within a few years they will want their own account.

If it is only the Facemasks and filters you want your child to play with, there are of course other free apps that have versions of similar face filters, that don’t have all the other adult content and access to the adult world that Snapchat has, but most parents and children just don’t know about them, Snapchat is the leader in that field. CamCam is an example of a face filter app. See more examples at Commonsensemedia.org

Why can’t Kids Have Snapchat?

How Young Is The Youngest Snapchat User In Your School Or Neighbourhood?

The trend I see with younger and younger children using adult designed apps is worrying. It is exposing children to the adult world through the media hosted within the apps, and puts them at risk from approaches from strangers online. I have also received increased reports of bullying and unacceptable behaviour on Snapchat and other social media apps within primary schools as a result .

I expect to continue to see younger and younger children signing up for Instagram, Musical.ly and Snapchat if parents are not educated on the negative effects of children using adult platforms before children are mature enough to cope with the adult content and deal with some of the social issues that they have to navigate within these apps. Clearly, informing parents that there is an age restriction on these apps, makes very little difference if parents don’t feel these apps are harmful for younger children.

Parents are increasingly asking me how they deal with a situation where their child feels left out in their social group, as they may be the only one NOT on Snapchat or Instagram in primary school. From the feedback I get from children and parents, it is not yet 100% uptake of social media amongst primary school children, their child won’t be the only one….yet. What I usually advise parents is to do in this situation is to do their research, find out as much as they can about these apps, and then make a decision on safety not on popularity.

If we don’t turn the tide on this trend I do foresee a lot of problems for parents who really want to protect their children from the adult world, feeling enormous pressure to put their children possibly in harms way for inclusion. I’m already seeing more and more problems in every single primary school I visit, with many teachers absolutely stunned with how many of their pupils are allowed to have these apps at such an early age. Schools that have less children using these apps, simply have less issues brought into schools involving these apps.

Just Because These Apps Are Popular, Doesn’t Mean They Are Safe For Younger Children

Parents will often say to me that they really thought an app was safe because so many are using it. Or it “looked” safe. Popularity is no measure of actual safety.

It is also important that parents explore these apps through the eyes of a child and understand that children do not use these apps in the same way as they the adults may use them. Children may find all sorts of content within Snapchat that parents won’t know is there. Snapchat can be a tricky app to navigate. It seems to have many different hidden access points that adults may not immediately find.

Before you allow your child to have Snapchat, Musical.ly Instagram or Facebook, please do some research on how these apps work, the age limits, and how these apps might effect your child’s wellbeing. Read the reviews on my website and on Commonsense Media.

I have yet to see any research that suggests that allowing your child access to an adult platform with adult content helps to prepare them for life in the future.  But I have seen more and more research that suggests that this trend of allowing children on adult apps can be dangerous, and add to anxiety and stress. Being connected with your peers is fantastic, but for younger children it has to done on platforms that can be closely supervised with no access to adult content and online strangers.

Education and awareness of how these apps work, what is contained within them and the effect they will have on our young children is vital to stem this tide.

I just bought my first wearable…..Don’t know what a wearable is? Crawl out from under that rock, and welcome to your future. Wearables are digital internet connected devices that you wear…nope not talking about your iPod or mobile phone worn on your arm in a holder…but digital communication smart devices that are either embedded into clothing,… END_OF_DOCUMENT_TOKEN_TO_BE_REPLACED

Sponsored By Ownfone Perhaps your child is starting to become a little more independent, catching the bus home or being dropped off at parties and after school activities. Parents love the idea of being able to call their younger children to advise about changes of plans or have their child call to remind mum or… END_OF_DOCUMENT_TOKEN_TO_BE_REPLACED