You cannot open a newspaper or read news online these days without seeing a story about a child being bullied online, stalked, or taken advantage of. Some of the stories are so heartbreaking I can’t bear to read them. The reasons why the bullying or stalking has progressed to a point where it has hit the news, is sadly most often, that the parents were totally unaware of what was going on before it was too late. The Kids didn’t tell anyone, and if they did, no one thought it was serious, mum and dad didn’t know what to do? Authorities didn’t act.

I actually know parents ARE concerned about cyber safety and computer addictions, I hear them talking about it, but their actions or inactions don’t support their concerns, and this confuses me. Statistics show that parents are more terrified that their child will be stalked by a pedophile online than any other attack that can occur online. But in reality the likelihood of your child being “groomed” or stalked by a pedophile is far less likely, than them just simply being bullied and taunted to the point of absolute despair by other kids that they, and their parents know. The figures all bear this out. http://www.zdnet.com.au/parents-dont-act-on-cyber-safety-fears-339301950.htm

When I held my first cyber safety talk at my son’s school last week, I was warned by the head of school that it was very likely that only a tiny percentage of parents would actually turn up to the talk, and he had no idea why. Apparently this school had previously booked an “expert” on Social Networking safety from the USA, a woman who was a leader in her field, who had written books on the subject! But out of the entire school of 700 students, a mere 12 parents showed up, and a few of them were…couples! So relatively I guess I should be grateful I had 14 parents of just year 8 students with only one couple. By comparison it was a huge turn out!

Now, this school is NOT full of unsociable parents who don’t care about turning up to events, its a private school and so the parents are reasonably well off, they are more often buisness owners, they turn up to lots of events at the school, French dinner nights, concerts, cocktail meet and greets you name it a great crowd! and they are, from all appearances really caring and involved parents! So whats going on here?

Are the parents at this school, so up to date with social media and cyber safety they see no need to go to this talk? Are their children totally safe and well balanced on their computer use? Is there nothing I can teach them about cyber safety or computer monitoring? Why are they suddenly too busy for this talk?

I thought a lot about this conundrum in the days and weeks after this talk. I wondered why my son’s school has had a history of this sort of response, especially when the family economic demographic meant that most, if not ALL households had computers and were online, but as part of my investigations, I found out that other schools have similer problems. Parents just don’t want to turn up to talks on Cyber Safety for their kids. So a lot of schools are simply NOT bothering to hold them, they book talks for children only and in school hours. I noticed that another cyber safety talk was being held during the same week, but was held for several schools on the North Shore, I wondered if the organisers felt it was going to be more successful to involve several schools and get more of a turn up?

I don’t know why parents are not showing up, but I need to find out! I need to help give parents a reason to show up, to make it an imperative to show up, because I feel that this is so important! If this issue of Cyber Safety is all over the news, I just don’t understand why are other parents just not concerned enough to get educated and get involved? Maybe, its about turning a blind eye, it’s too hard to face. Maybe they don’t want to look clueless, maybe they think their kids have it over them already, maybe its the “It will never happen to us” syndrome. Maybe they are just too intimidated to go to a talk? I’m baffled, what am I missing here? Is it the same as the “Kids Drugs and Alcohol” talks? “it doesn’t feel good so I don’t wanna go”? Maybe we should bill our next Cyber Safety talk as a trivia cocktail night and trap them! lock the doors! shrugs…

Now lets be clear, I’m not a Cyber Cop, I’m not a University Professor with a degree in digital social networking. I’m presenting these talks from the perspective of a mum of 4 kids from Age 11 – 28yrs, admittedly a totally geeky one, but presenting these talks hopefully in language you will understand and with ideas about how to make it work at home. I am NOT intimidating, (I hope). I really do understand how hard it is to monitor your childrens behaviour and to keep kids safe online and deal with computer game addiction, it can be very hard work!…I’ve been trying to keep my kids safe online quite a while…and I had to learn by trial and error it was all very new back in 1995. Im not judging you, and honestly, I totally understand your bewilderment. But parents…you CANNOT afford to stick your head in the sand over this! It’s getting more and more complex by the day, and the longer you ignore it, the harder it will be to catch up.

This issue is NOT going away, and its so important for parents to get involved now, for your kids and your eventual grandkids! you need to have conversations with your kids about online behaviour, and you need to understand where your kids go at night, BEFORE anything upsetting happens!

You might as well take your child to a city train station leave them there and ask them to find their own way home…you wouldn’t do it.

Even if you decide its all to hard “I’m banning the LOT “, unless you are living in an Amish community….your children’s friends will most likely have computers and online games…

I wish the real reason that parents are NOT showing up to talks, or getting educated about Cyber Safety was because parents already do have it all set up, and because they are already fully aware of what their kids are up to online, but the stats and sad episodes of cyber bullying just don’t back this up.

What is it going to take for some parents to take steps to be part of their childrens online lives? I really hope it isn’t something that hurts their kids.

Please read these stats. Taken from this article. on Human Capital League.

Go to a Cyber Safety Talk, if not mine, someone elses but please parents get involved and get educated! 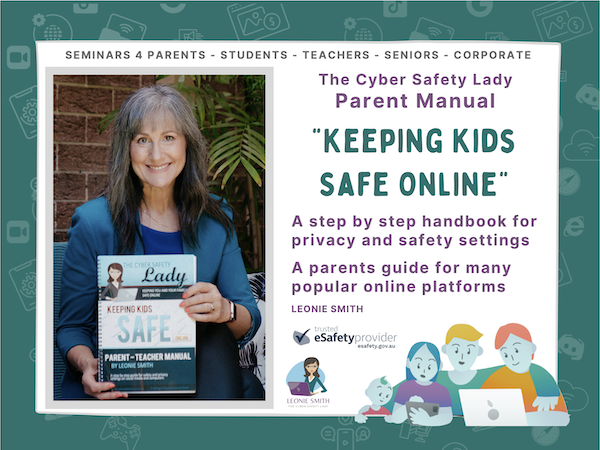