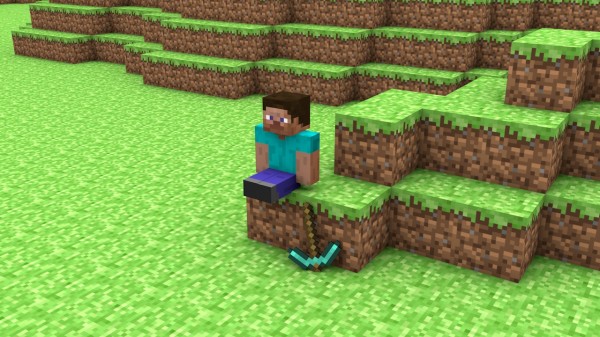 But with supervision and with some caveats.

Firstly I have to say I’m NOT a Minecraft player, however I’ve just had a play on it with my own kids on their own server… (so I’m really only saying this as a mum looking over my teens shoulders)…My two boys and their freinds are players, they are on it all the time, when they are allowed to play computer games that is…we have rules for game times. The pic above is taken by one of my sons friends.

For those people out there who don’t know what Minecraft is…Imagine online Lego with friends, but, you are the size of the little Lego people and you can build together, explore together, and fight off creepers and zombies, and have pigs and dogs ect. Fun yes! Most of the players time is spent mining things to build, making things to eat, and building cool things, houses, mazes ect…my kids have a sort of large frat house, they are going to build me my own room, but what I really want is to change my avatar into something a bit more girly….no hope there yet, I have to work harder to get the right gear to do that… 🙁

Before they discovered minecraft, my kids spent most of their gaming time playing Halo Reach and other games many of which are shoot-em-up games or space ship fighting games. They were playing them creatively making up stories, filming them ect…but I hoped one day they might try something more inventive and less violent! 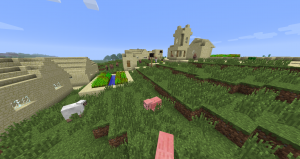 Minecraft can be a MMOG (massively Multiplayer Online Game) meaning you can play with other players online. But you CAN have your own place (Server) that is “invite-only”, or play by yourself. The same rules should apply for any MMO’s that your kids play, there are adults that play this game also, so you do have to be careful, you need to supervise, and you need to educate your kids NOT to make freinds with grown-ups, I wouldn’t suggest under 13yr olds play it unless it is with a supervising adult or on a private server or as a Single Player.

But as far as safety goes, this game is very much PG. There is no blood shed, unless you count a pig being turned into a porkchop…you don’t see slaughter ect…there are no guns YAY and only minor sword, bow and arrow combat, most of the time people playing Minecraft are just building things and playing in them. You will hear things like “Hey I chucked you some mushroom soup”, “I have wheat now”…”Oh look some lead” or something…”I’m mining some gold!”…much better than hearing kill that guy! KILL KILL, well except for a few creepers, and spider’s and you will want to avoid them or kill those…Yes you can kill each other but its not blood thirsty, and friends don’t do that cause it takes a long time to build your health back up again…(re-spawn)

There are greifers….people who go around trying to destroy your stuff, but if you have a private map thats not going to happen. And the game moderators are pretty much on top of any bad behaviour.

This game is great for creativity, for fun, for team work, for challenges and collaboration. My kids only play with people they know, and only sometimes go out onto the public grids. They love it! The things they can make are anything from houses, to castles, to huge statues, roads, anything that can be made of blocks basically with lots of ways to make their constructions unique.

Setting up your own private server for the kids to play on is no easy task so don’t attempt it unless you are a fully paid up Geek! Thanks go to my Twitter geek freinds who were able to assist my son in being able to set his up. Its not an expensive game costs about 20EU to download.

Also a note: Any server that has PVP as a description means Player Verses Player and they might get attacked.

Do you or your kids play Minecraft? What do you think?

From the Website “Minecraft is a game about placing blocks to build anything you can imagine. At night monsters come out, make sure to build a shelter before that happens. It also has music by C418! So far 8,483,717 people have registered and 2,331,652 people bought the game”

Here’s a link to setting up a private server where you can white list (or allow only friends) This comes with warnings, if you aren’t a cyber savvy parent or child…follow instructions at own risk!

← Should Kids Under 13yrs Be On Facebook!
Why Don’t Parents Care About Cyber Safety? →