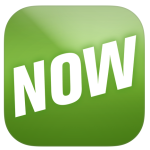 YouNow is a public live video streaming app that has been around a few years. I’ve written about it before, but due to some increased publicity around this app, will mention it again. If you visit www.younow.com you can view YouNow users streaming live video’s of themselves online. You can also see how many people are watching them, and read the comments that are also live on the platform. YouNow have a strict age limit of 13+ years to be able to use the app, but it’s obvious from first look that they don’t verify ages, or prevent younger kids using the app. I saw several children that were clearly younger than 13years streaming themselves doing all manner of childish things.

Even at 13 YouNow is very risky, I watched two supposedly 13year old girls with over 300 viewers talking about themselves and revealing their real life first names, whilst sitting on the floor wearing very short shorts declaring how “hot” they were over and over. The commenters were asking them to dance, and complimenting them on their hair, and their looks and saying how “hot” they were for 13year olds, telling the girls they looked almost 18 (they didn’t, if anything they looked about 11 or 12). It was decidedly creepy and really frightening to see these girls, sharing their Instagram profiles with the viewers so that they could connect with them there also. See the picture below to get an idea of the chat. 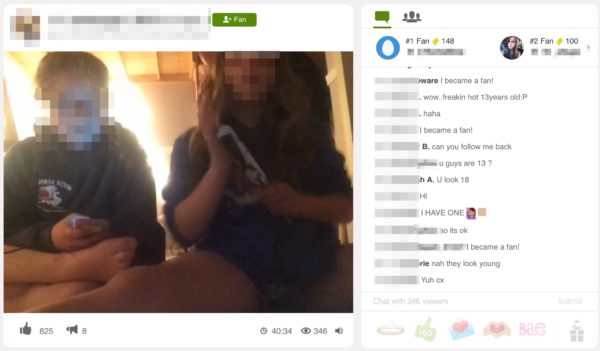 If you haven’t heard of these two video streaming apps, you soon will, both apps are getting a lot of publicity right now. Both apps are linked to Twitter, the incredibly popular micro blogging network used by billions of people around the world to publish “Tweets” or posts, about what they are thinking or experiencing any minute of the day.

These two relatively new apps, allow Twitter users to film and stream their own interactive video recordings in real time to the public or their followers. Periscope has been developed by Twitter in response to the very popular Twitter linked video streaming app Meerkat.

Celebrities, politicians and regular folks are all signing up to be the first to use the latest “cool” app, to stream their events or victory speeches. Both apps, especially Periscope are being touted as the latest live news broadcast threat. With eyewitness real time interactive video capable of being live streamed with the videographer able to respond and interact with the viewers who can ask them live questions as they are filming, i.e.. “What is that over there!!”

The problem is that live streaming has also been very popular with pornographers and predators wanting to pick up young kids online, who think it’s exiting to live video stream, so where are the protections on these two new apps? More below. This is where parents really need to be aware and supervise what their children are doing online.

You can “Report” any unsuitable broadcasts on both apps, but by the time they are reported, it will be too late by then. On my first viewing of periscope I was presented first up, with links to live streams with very adult titles. (see pic) below.

Meerkat is rated 12+ on the iTunes store and has almost the identical terms of service to Twitter’s in regards to children under 13.

Like many new apps, it sometimes takes a while before the developers find ways to limit the amount of objectionable content. They may do it with blocking well known words or terms that are used to in the titles. But that method is not failsafe either, other terms can then be invented to get around these blocks, much as happened with Instagram. Instagram is full of adult content, you just have to know the right search terms or #hashtags to find it.

This concept is NOT NEW!

Live streaming video has been around for years, and in the past it’s been used for popular apps like “Chatroulette” and “YouNow” both notorious for streaming adult pornography and encouraging virtual hooking up. There have been a lot of articles written about these older apps, and the dangers to youth, who can get drawn in by predators looking to find children who will film themselves nude or will respond to sexual comments.

Periscope is very very dangerous for kids in my opinion. I’ve already seen a young girl broadcasting from her bedroom in the dark getting some very intimate questions asked of her on Periscope.

← Protecting Your Family Photos Online
Is Pinterest Safe For Kids? →