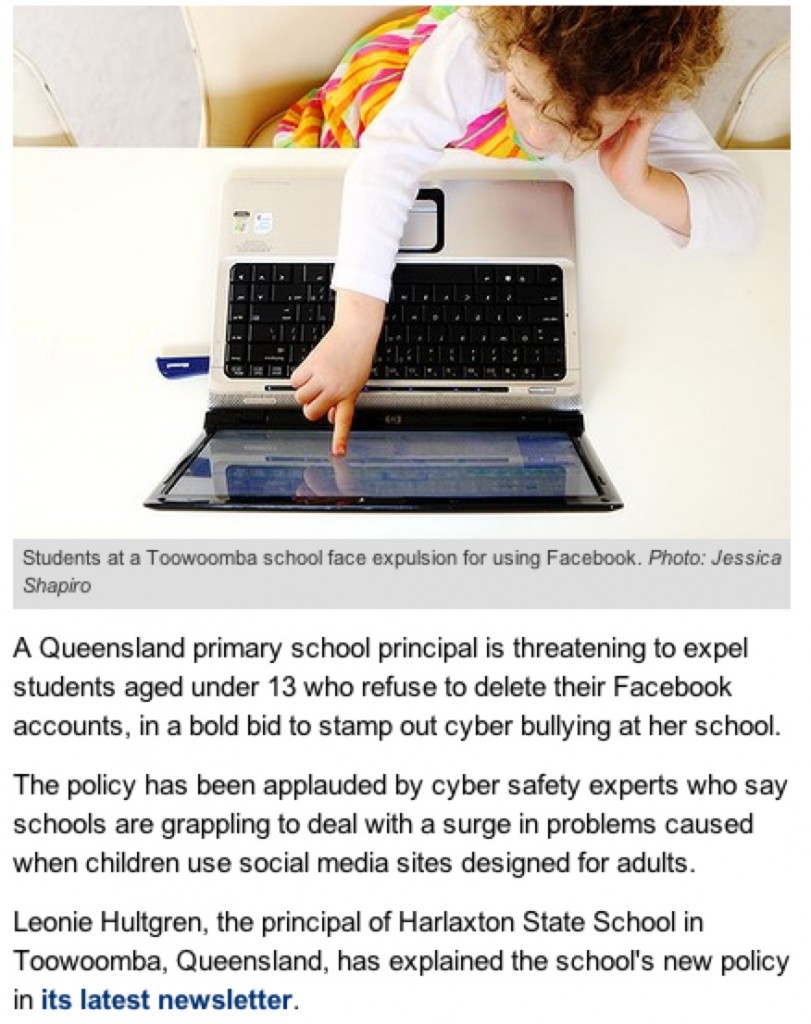 This article (see left) in todays Brisbane Times doesn’t surprise me. I know of another school here in NSW on the Northshore that has a similar suspension policy for Children under 13yrs with Facebook accounts, I’m sure there are probably more.

In the Times article it reports that the headmistress Leonie Hultgren from Harlaxton Public school in Queensland sent a newsletter around to students parents announcing that any pupil under 13yrs found to have a Facebook account will may have to report to her and possibly be expelled.

“Parents should understand that a student who contravenes the law or rule in a digital scenario may need to meet with the Principal to discuss this issue and their continued enrolment at Harlaxton,” Ms Hultgren wrote.

I’m guessing that this rather extreme threat has probably come out of sheer frustration that the impact of Facebook has had on her younger students.

Teachers tell me when I talk to them about my Cyber Safety talks and classes, that Facebook related incidents have become one of the largest problems they have to deal with on a Monday morning, along with texting bullying. Even if the incident occurred, as it mostly does, outside of school hours. Every Monday morning many school teachers know they are going to have to deal with some sort of fall out from Facebook use by their students both under age and over 13yrs. And the line between what is the schools responsibility and what is the parents and the child’s responsibility is often extremely difficult to draw. If a child has been bullying or behaving inappropriately on Facebook and it involves other members of their school community most schools feel they do have a duty of care, and many parents do expect the school to try and clear it up, in much the same way as they would if their child was bullied on the way home from school, but not on school grounds by another pupil from the same school.

Who’s Responsibility Is It?

It seems that most teachers do want the parents to get more involved, and that most parents want the teachers to “teach” their own children about online social media behaviour and safety, many parents just don’t feel up to it. But here’s the thing….most teachers do not usually sit and watch over their pupils in the students homes whilst the student is on their home computers…and this is when the majority of the poor behaviour is happening…under the parents care, parents, who often have no idea what their kids are doing online.

Although I don’t believe this particular high school principle has the power to expel a student for an under aged Facebook account at this stage, I understand the sentiment behind her ruling completely. Kids under 13yrs of age are technically banned from Facebook, its against Facebook’s Terms Of Service and if reported Facebook will delete the profile if they feel it warrants it. One child who’s family I helped to delete their underage account, set his age at 103 years of age..he was 12, and had over 200 friends, most he didn’t personally mix with, and many of them were much older teens, he was “collecting” friends. The more you have the more popular you appear. Most Adults don’t know that there are restrictions on under 13yr old use of most platforms on the web, including Twitter, YouTube, Facebook, Instagram and more. These restrictions are primarily as a result of an American Act passed by congress called “Children’s Online Privacy Protection Act of 1998”. It is, in short, an Act that all online platforms must comply with, if they gather information from users and store it online.

“The Children’s Online Privacy Protection Act (COPPA) requires that operators of websites or online services directed to children under 13, or those that have actual knowledge that they are collecting personal information from children under 13, obtain verifiable consent from parents before collecting, using, or disclosing such information from children. The FTC’s Rule implementing the COPPA statute became effective in 2000.”

Most Adult online platforms don’t have a facility for joining up with parental permission. Most platforms simply don’t want to risk being sued or taken to court if a child on their adult based platform gets hurt, so they simply ban them. If you, as a parent, want your child to comply with COPPA, and as a result prevent them from having to lie about their age, then you had better check out each platforms terms of service. Skype is OK, MSN is OK. Online games are mostly over 13yrs, some are 15yrs and older. If an online platform is specifically designed for young children you are always asked for parental permission for them to sign up, its part of complying with this Act.

Parents Are Still Not Showing Up For Cyber Safety Talks

June 2011 I wrote a story about Parents not showing up for Cyber Safety talks. They still aren’t. Last week I attended a local Cyber Safety talk which was free entry, and facilitated by the AMCA / Cybersmart a national cybersafety education program managed by the Australian Communications and Media Authority (ACMA), as part of the Australian Government’s commitment to promoting online safety for children and young people. For a school with approximately 500 parents who’s children would fall within the age range of needing Cyber Safety awareness , 14 parents showed up, just 14… Admittedly it wasn’t heavily advertised, but every parent of children at that school got an email about it. It was another example, and I’ve seen quite a few… that most parents either think they are doing just fine, and some will be, or they just won’t make time to attend. Most parents I meet when I tell them I give Cyber Safety Talks and workshops, just have no idea of the issue around online behaviour and so many of them don’t know that there are any age limits online. Oh and it’s always someone else’s child doing the damage 🙂

So whats the solution? It has to be education of both parents, students and teachers. I know the teachers and students are getting it, schools who run cyber safety talks usually make it compulsory attendance. But most parents aren’t getting educated, because they are not showing up. The Australian Govt is making a huge push for Cyber Safety awareness right now. With Cyber Safety and Internet Safety weeks, which was why Cybersmart was holding the talk last week. But I suspect they are missing the parents participation if the talk I attended was in anyway typical. What’s been your experience?

It’s not a problem until your child gets hurt. I just hope that if your child does get hurt he/she can recover without too much trauma.

Note: Right now employers are checking out Facebook accounts to see what sort of employee you might be, figures are as high as 50% it’s probably more, and you will never know unless they tell you. You can’t legally be forced to hand over your log in details, but unfortunately that’s not a problem for most employers or other institutions checking you out…as most users of Facebook have no idea how to set up Privacy Settings, and are wide open to the public. (Here’s How!) And Timeline on Facebook is making it easier and easier for a total stranger (if you don’t have privacy settings set up) to look back at your Facebook history, one click and they can search 5 years back…Your child’s behaviour online now might be dragged up in 5 years time and used against them. For employment, a bank loan, anything that they are wanting to apply for. It’s not right is it? All kids need a safe place to muck up. What is your child doing online, right now? This is only going to get more intrusive, not less.

If you are one of those parents who have a child under 13yrs of age with a Facebook account, as a parent myself of a 12yr old I do understand how it can happen, It’s peer pressure, kids join up without consulting you, they hide it from you, my son did the same thing. His account has been deactivated. He can have it back when he is 13, and really, losing his account at 12 hasn’t really been much of an issue. Half the kids he knows are on Facebook half aren’t so most of them communicate through email, text and Skype. As a Cyber Safety Advocate and a parent who has been on Facebook myself for 5 years, I’ve seen too much on Facebook to allow it. Take a look around Facebook. The way you might use it, is NOT the way kids use it. They find the Adult content you don’t know about. See my other posts for more.

So should children be expelled or threatened with expulsion for having an under age Facebook account? I’m not sure it can be enforced and I do think it’s extreme, and unnecessary. It has certainly put the “Cat amount the Pigeons” as the principal has said. I do hope the publicity from this will shake things up, and get parents more involved with their children’s online life. It shouldn’t take a threat of expulsion to get parents to take more responsibility for their child’s online behaviour.

To report an underage child on Facebook go Here:

Filth & Magic Apps In the war against Cyber Bullying and Online FILTH! I’m constantly hearing parents asking for suggestions for computer timers and programs for blocking certain sites from young eyes. Most program developers would love to invent a fail safe app for parents to use to keep their kids totally safe online, (they’d… END_OF_DOCUMENT_TOKEN_TO_BE_REPLACED

From my article on ABC Technology + Gaming this week. Should kids under 13 years of age be allowed on Facebook? Should the age limit for Facebook, which is now 13+ be raised to 18+? From a recent article on Dawn.com: “WASHINGTON: Some 7.5 million of the 20 million minors who used Facebook in the… END_OF_DOCUMENT_TOKEN_TO_BE_REPLACED

I heard a very good interview on the ABC “Life Matters” radio program today entitled “Parental Control Of Facebook” about the latest Australian Attorney Generals suggestion to impliment changes to privacy laws to allow parents to have legal access to their children’s Facebook Profiles. In this interview Australian Psychologist Dr Sophie Reid discusses the potential… END_OF_DOCUMENT_TOKEN_TO_BE_REPLACED

“THE nation’s attorneys-general will discuss whether laws should be introduced to allow parents access to their children’s Facebook accounts and social networking sites, allowing them to legally breach their privacy.” The Australian National Affairs Author Verity Edwards There is to be a discussion amongst the Australian Attorney Generals about the privacy laws in regards to… END_OF_DOCUMENT_TOKEN_TO_BE_REPLACED

From a recent article on Dawn.com “WASHINGTON: Some 7.5 million of the 20 million minors who used Facebook in the past year were younger than 13, and a million of them were bullied, harassed or threatened on the site, says a study released Tuesday. Even more troubling, more than five million Facebook users were 10… END_OF_DOCUMENT_TOKEN_TO_BE_REPLACED