Re: Daily Telegraph’s Stop the Trolls…

I do think it should be easier to block Twitter bullies and their abusive Tweets, and it should be much harder to create new accounts on Twitter quickly or to create too many multiple accounts.

Not to belittle the hurt and pain felt by recent cyber bullying victims…but, let’s take a step back. Trolls by definition, are NOT cyber bullies, these are two different types of internet users. Trolls are not always nameless bullies but in the correct use of the term, traditionally post opposing views of varying intensity and language to stir things up, often on forums or in comments on blogs and now on Twitter. A Troll may not necessarily also be a cyber bully or a stalker. Trolling, as it is traditionally known, if done harmlessly can be really be a sort of devils advocate in a discussion and stimulate healthy debate. It’s when a comment crosses the line into outright harmful abuse that is might be termed cyber bullying. A cyber bully or online stalker is more likely to be breaking the law through abuse, harassment and threats. It maybe pedantic to distinguish between the two, but for the purposes of trying to discuss online bullying it is important to use the correct terminology. See my other Post on Trolls

I referred to the Charlotte Dawson Twitter bullies as Trolls in one instance during my 60 minutes interview in reply to a question that used that term, but really, although the attack aimed at Charlotte Dawson may have started as Trolling, in the end it wasn’t Trolling as it’s traditionally known, but straight up harassment and online abuse and bullying, and there are already laws in place to deal with that. 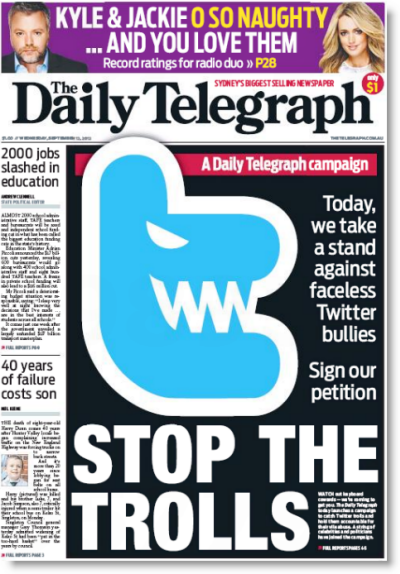 So What Needs To Change?

If Twitter as a service made it possible to not only block the bullies but remove the abusive Tweet from your Twitter stream it would be easier to deal with. Right now if you block another user on Twitter, the offending Tweet stays in your @mention list…where you can still see it. You cannot delete it from your @mention list, and being able to continue to see that Tweet can be in many cases quite distressing. I’m not talking about removing it from the Internet, that’s another matter, but if you don’t want to see that Tweet you should be able to at least remove it from your Twitter stream in the same way as you can remove an offensive comment on Facebook from your wall. Twitter already has a built in filter to prevent Adult content being sent to you, but I don’t know how reliable this setting really is. My previous post gives step by step instructions so that you can see if its enabled or disabled. I’d like to see more useable filtering for Twitter if you want to use it. So you can filter abusive language.

Being able to create multiple new accounts very quickly on Twitter is also a problem. If Twitter remove an account for being abusive or Tweeting illegal material, then surely that person shouldn’t be able to simply start up a new one without going through some hoops. You do need to use a different email address for every new account but It’s so easy to create new email addresses nowadays.

Serial Accounts: You may not create serial accounts for disruptive or abusive purposes, or with overlapping use cases. Mass account creation may result in suspension of all related accounts. Please note that any violation of the Twitter Rules is cause for permanent suspension of all accounts.

Twitter can ban users at their I.P level meaning that from your computer location you won’t be able to set up another account until the ban is lifted…unless you know how to set up another I.P from your address which is fairly easy for a Techy type person, instructions can be found by Googling. On a recent forum I saw people talking about thousands of Twitter accounts being set up on 50 different I.P addresses from the same user. I bet that sort of behaviour keeps Twitter really busy. Note: There is always a work around to every rule on the Internet!

If you are dealing with a serious spammer or cyber bully on Twitter, it is pretty much impossible to block them, unless Twitter or the police find them and charge them and their internet access is taken away.

In April of this year 2012, Twitter successfully sued 5 “Bad Actors” (not the theatrical kind…) who had created tools or Apps that Twitter said were used for spamming. But as far as the repercussions for breaking Twitter’s TOS for multiple accounts, it seems suspension is the only result, which of course for a cyber bully with the determination and smarts to get around the banning is really only a minor slap on the wrist and ultimately unenforceable.

You Think This Is Bad….

Unfortunately the recent Twitter abuse of Charlotte Dawson, Julia Gillard and now Robbie Farrah and subsequent media storm will only encourage more Cyber Bullies to attack other celebrities and high profile Twitter users. The media is so hysterical about “Trolls” right now, that the really sick bullies using Twitter to get their pathetic “jollies” are seeing extra potential for “fame” and “glory” by being the one that pushed their victim to cry “Troll” and go to the papers, or the Prime minister! . This is going to get much worse before it gets better.

Shouting hypocrite is easy to do, what is posted online stays online, and if you are going to cry “TROLL!!” then you had better have a clean slate I guess, or just admit that yes you have tweeted abusive tweets (as Robbie Farrah has just done) in the past and deal with it. High profile users of Twitter had better lead by example if they are going to be taken seriously. Don’t say on Twitter what you wouldn’t say to the person face to face…or….for those that would…would you like someone saying that to your mum/daughter/son/father..Some people just don’t care of course.

Real names may help slightly, but clearly doesn’t work, as Facebook insist on them, and cyber bullying is rampant there.

Also there are some very legitimate uses for “fake” names on the internet. Privacy for one.

Education is the key here.

Will a petition work achieve what it says it would like to? “Our goal is to push for Twitter to be obligated to work with authorities when these cowards have broken the law” Probably not, but I’m not sure that getting Twitter to hand over names is the answer. I think in extreme cases there definitely should be repercussions, but is the problem not being able to “hunt” Cyber Bullies down and have them prosecuted? Or is the problem, not giving users enough powers to be able to filter their feeds for abusive language and images.

Most importantly users of online platforms need to be educated in how to deal with any online abuse whether its on Twitter, a blog, on Facebook or anywhere else where it can be publicly seen. And if it’s illegal abuse report it and use the existing laws to deal with it.