After reading all the stories about the game app called “Talking Angela” rated 4+ available on iTunes and Google+ and being linked to pedophiles I decided to take a look at it. The only danger I can really see after a few hours with it on, is danger from marketing overload!

I wouldn’t recommend this app to any kids or parents as it, like so many apps on the online game stores, are so heavily slanted towards monitization that it comes across as mercenary. Yes you can turn off the advertising…for a price, but it will still prompt you to spend money for game coins, or watch advertisements.

There is a “child mode” switch on the app, which prevents the text chat ability, but there is nothing to stop a child from turning it back onto adult mode. In the few hours that I had the app open it didn’t ask me any questions that were impertinent or really invasive. The developers assure users that they don’t keep data associated with location but use a child’s age, name to make the app work better. But you had better watch what you say on the app. For kids they should definitely use a made up pseudo name.

I tried to annoy the cat, and to get the cat into a conversation that might be seems as provocative, and it actually brushed me off!

Such a pity that this app is so heavily monitized, because it is quite cute. Angela the cat is quite precocious though and a little bit too sexy looking….unless that’s what you are after of course…

Is Talking Angela Safe For Kids?  On first look it seems so, certainly haven’t yet seen any evidence that confirms the rumours going around. Snopes and Naked Security also have a post on this disputing that any of the claims are true. Well respected blog Mashable have also spoken to the developer about the accusations which have now propelled this app to the top of the iTunes store! There’s a rumour about a man’s reflection in the eye but I think it’s simply an optical illusion brought on by an overly active imagination.

Below is a video I did showing you how Talking Angela works and showing you what some of the rumours are warning of.

If anything positive does come out of this, it would be that parents will pay a little more attention to what apps their kids are using. It’s sad that many social media apps meant for adults like Kik Messenger where kids ARE actually getting contacted by adult strangers and drawn into sexual conversations and being sent and asked for nude photos and yes there is actual evidence, are not being deleted by parents. I guess it’s more exiting to have a conspiracy.

The 2 is for nice graphics and fun ability to imitate the users voice or sounds.

More information about the security of Talking Angela from the developers Outfit7 Here: 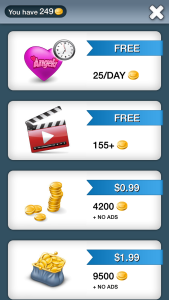 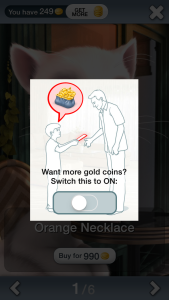 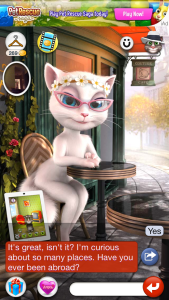