If you have a Facebook Friend that you would rather was not seeing your regular “to friends” posts, but you can’t block them or de-friend them without causing an issue…There is a neat trick you can do with Facebook lists, to prevent them seeing any posts, other than updates you post publicly (meaning globally with no privacy settings)

Facebook has a “Lists” function. You can set up “Lists” to categorise your friends. You can sort your friends into lists e.g “Old School Friends” “Family Friends” “Work Colleagues” so that you can send out posts to those lists if you want to tailer your posts to those lists. For example, perhaps you can post an update about an upcoming school reunion just to your old school friends list for example.

Facebook’s Lists function also has a “Restricted List” built in. If you add a Friend to the “Restricted List” the friend on that list, won’t know they have been added, but they actually won’t see any of your posts in their news feed or on your profile, except for publicly posted ones.

Reasons you may have for adding this friend to this list, is that you friended them in a moment of weakness and now you regret it, but don’t want to hurt their feelings by de-friending them. They may be a work colleague and you’d rather they just didn’t see any posts from you at all. But you couldn’t turn their friendship request down.

There are a few ways to do this.

2. Hover your cursor over their name, either in comments, or on their Facebook profile and follow the second set of steps below.

The only way a person can find out you’ve been hiding from them using this technique is if they go to your Facebook profile, and don’t see any updates all of a sudden. So beware it’s not totally fool proof… 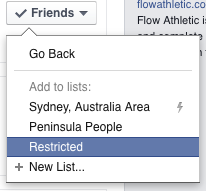 Let me know in comments if there are any issues.