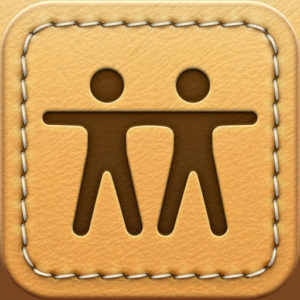 Answer: It depends on the child.

“Find My Friends” is an Apple mobile App that uses Geolocation and maps to track the location any “friend”, that accepts the offer to be added to your app. Your “Friend” has to also have to have an iPhone with “Find My Friends” installed on it. (or an iPod connected to Wi Fi) I’d never use if for friends, it’s too much of a breach of privacy.

I’ll tell you a funny story first before I go into it’s other uses.

Personally I love “Find My Friends” but I only use it for our Family.

About a week ago, my husband and I were away at a lovely mountain cabin hideaway for our anniversary, when on the first day there, I got a panicked phone call from my 16yr old son asking me to go onto my “Find My Friends” App on my iPhone to look for… him..

When I loaded up the app, I could see the little pink dot (his iPhone) quite close to his school, but.. on the main road, and it was moving! Someone else had his phone! When I told my son, he yelled “it’s on the Bus! ” Me: “How do you know its on the bus?” Son: “I left it there, it must have fallen out of my bag” Me: “sigh….well its now going down the main street”. Son: “Which direction is it heading? North or South??” Me: “South towards you!” He was staying with a friend, who was right now in the background gleefully engaged in this modern day Sherlock Holmes mystery…

Me: “Oh well we will have to call the Bus Depot”…Son: “No the bus is coming our way! It will come right past us!” Me: “It may not being on the same route…what if it’s going to keep going till it gets to the city?” Son: (using his special ESP powers) “No!!! it will come back this way!” Me: “ok…” Son’s friend is chanting that they should “go to the cross street to head it off, if it does go the other way”…Son: “But there isn’t time!!!” Friend is singing the theme song from Mission Impossible…(I kid you not!) I’m still watching the phone’s pink dot moving along the main road about 2 kilometres from them…finally the dot gets to the cross roads, and as my psychic son predicted… blow me down…it continued on along the road he and his friend were now walking towards, to the bus stop they had got off on not some 3 hours prior! Yes the phone had been on that bus for 3 hours.. if it was the same bus…Me: (getting into the swing of this Mission Impossible episode) “It’s coming closer!!! its just 2 mins away!.. Son: “I see the bus, I see the bus! OK (he continues) (his friends name) You explain to the bus driver what’s going on, I’ll get on the bus, and go to the seat I was sitting on, ok? It’s here, the bus is here! ….” I can hear my son walking down the bus, announcing to all, that his phone was left on the bus and has anyone found it…I can hear the passengers saying, what does it look like? do you have a picture……Son: “Ring the phone mum, Ring the phone!” So I grab my husbands phone…and ring the phone…and I can hear his weird, space age phone ring!!  (There’s none like it)…ringing…! Son: I found it I found it!!! OK-bye-mum…click…

Um ok thanks son…you’re welcome and all of that…

What are the chances of that happening! The phone, in a black case (a bullet proof case, made for Teenage sons) wasn’t found by another passenger in within the 3 hours it was missing, it was still under the seat..and had spent 3 hours going around the Northern Beaches, and  3 hours later HAPPENED to be on the way back to my son’s location 3 hours later, just when he realised it was missing! The odds!! My son just didn’t grasp the incredible gift we are given with technology, he is a digital native after all…Later when I pointed it out to him, he was like…yeh ok.

Why Not Use “Find My Phone”?

The first time we used this app to find his phone, was when is was lost in the house. We tried ringing it, but we couldn’t hear it…we looked at “Find My Friends”, and could see that it was in the house, we could even see what end of the house it was, but not if it were upstairs or down…but we got close enough that I started to hear it ringing, very quietly…sigh…The reason we couldn’t hear it was… because….. it was inside a board game box, in the game cupboard…the board game my son hasn’t used since for 3 months!!! I mean …I won’t say it…but really? A friend packed it up with the game..Le Sigh…

The other time this app came in handy (not just for finding my boy’s wandering phone),was when he travelled by himself for the first time though the city and onto another connecting bus to go to a holiday course he was attending. Because he had the iPhone with him, I could see him on the way, and could see him safely at his destination without me ringing constantly like a frantic mum…which I was. I knew if he did miss a connection or got lost, he could ring me and I could guide him by looking at “Find Your Friends” to where he was supposed to be.

If he forgets to ring me to tell me he has something on after school at school I can look at the app, and see where he is.

I was picking him up in the city one day, and he couldn’t really describe to me very well where he was…I had “Find My Friends” on the phone and found him easily.

(No I’m not getting paid for this commercial…)

Lost Husbands…NOT WHAT YOU THINK!

One day my husband went for a bike ride, he was only meant to be gone about 45 mins..but he was gone for an hour and a half, we had to be somewhere and I was worried…I found him at…Bunnings!!!! grrrr.

I really don’t use the app at all very often, but when it’s needed to track down a “lost phone” or “lost family member” its wonderful. My son worried I’d use it to spy on him…(he’s not the sneaky type..) but after our experiences with using it, he is so glad I have it, and I don’t use it to spy on my kids…or my husband’s escapades at the local hardware store…must check out that store and see if there’s a pretty girl behind the counter…hmmm