At today’s Cyber Safety talk, yet another adult Facebook user told me about being unhappy about someone “tagging” them in a photo uploaded to Facebook without their consent. Increasingly I’m hearing from adults who object to even their friends tagging them without asking. This is now a problem for Teens and Adults. Teens have been using tagging to bully for ages! A lot of adults using tagging are just not aware that what they are doing might upset someone.

What’s So Bad About Tagging?

How about just an embarrassing photo? Some other scenarios might include, a photo that is uploaded to Facebook that was taken somewhere you were NOT supposed to be? Or a photo that is less than flattering of you…it could be just a photo, where, you look odd, your hair isn’t playing nice…Shouldn’t you have a say in photos of you being uploaded to the Internet, and possibly put on an unsecured (incomplete privacy settings) Facebook profile where anyone can then download them and use them in some way?

Tagging photos, unless at a public event where you have given permission to have your photo taken, might end up costing you a friendship, or worse, the trust of a loved one

On Facebook, and some other applications (Foursquare, Instagram) it’s when your name or a location is attached to a photo or a post. i.e, “I’m here at (tag) Bondi Hotel with (tag) Sue Blastett!!!” Tags are not just attached, to the post or photo, but the up-loader, you, and everyone in their circles that they made it visible to, will see it on their news feeds, and so will their friends if they don’t have more secure privacy settings, and most don’t. Everyone in that extended circle can then go straight to that photo open it, and see it. They can then click on your Tag name and go straight to your profile, weather they are friends or not. (Be sure to block your profile to non friends see my other posts, and my Cyber Safety book for privacy settings). Now…it might actually be a photo of you… or not…Tagging can also be used by spammers to get your attention to a photo. They “Tag” your name on a photo of whatever it is they want to sell you, and then when you go to look at it, or your friends go to look at it, after getting the alert, be careful who you “friend” on Facebook.

Non-Friends Can Tag You Also

Any Facebook user can tag another user in a photo whether they are “friends” with you on Facebook or not, however if you are not friends, you won’t get an alert about the tag. Your profile also won’t be linked to the tag in that case, as it is when a “friend” tags you, but your name will still be seen on the photo.

How Is A Tag Put On A Photo?

To Tag a photo, click on the photo so it opens up in the black slider window on Facebook, go under the photo on Facebook where it says “Tag Photo”, (see photo left) click that, and then click the image with your cursor where you would like to tag, a typing box pops up, where you can start writing the name of the person you want to tag. If the person you are tagging also has “Suggestion” or facial recognition enabled it might suggest the person before you even start typing, Facebook might recognise them as a Facebook user (Facebook has Facial Recognition), this can be a problem if the wrong person is recognised and then the wrong person tagged, don’t rely on “Suggestion” check the name obviously. (Instructions on how to turn off “Suggestion” or Facial Recognition on your profile is below). If the person you are tagging is your “friend” on Facebook, their name will likely come up as a suggestion first, and if you click the name they will then be tagged. You can also tag people you are not friends with, and friends on Facebook that are “Acquaintances” only. You can also tag people who are not even on Facebook! by using their email address. An email then goes out to them to tell them they have been tagged, and have to approve it, but they then have to create an account to see it….

How To Disable Auto Tagging On Your Profile 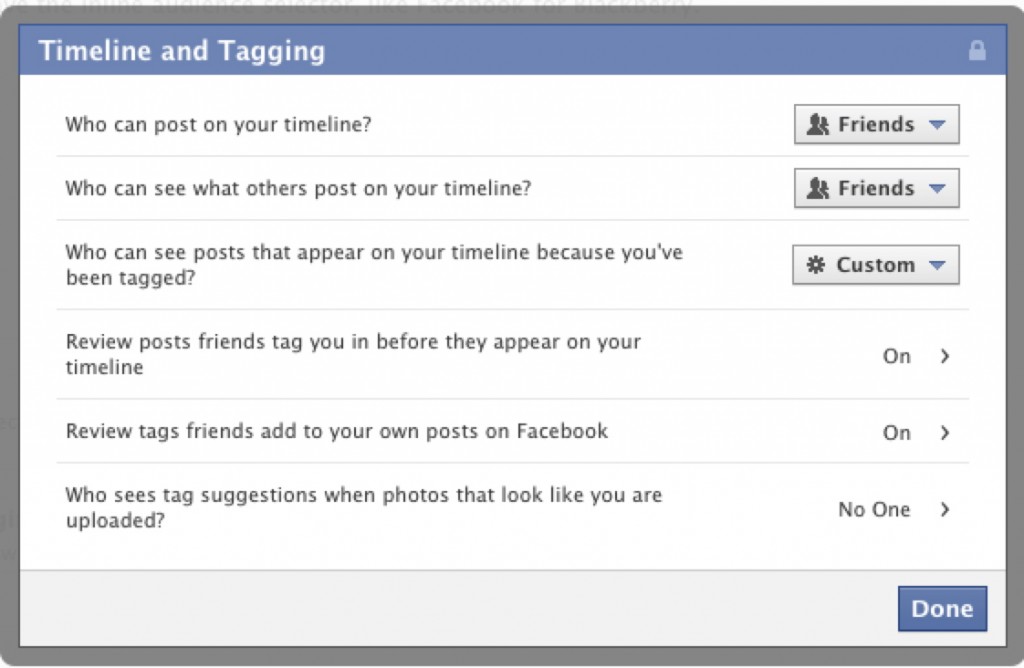 If you disable Auto Tagging on your Facebook profile you can prevent people from automatically tagging you and then having to go to all the trouble to take the tag down. (They are not notified that a tag is removed, it just won’t be there anymore) You will then receive an approval request for a tag on a photo, You will then have to go to the photo then and approve or disapprove it. This will give you some privacy at least, but not all, it won’t remove the photo.

Disable auto tagging by going to your privacy settings, (top right of your F.B profile, next to Home” drop down/Privacy) scroll down to “Timeline and Tagging” edit, and disable all the tagging permissions as shown in the photo left, (enabling means disabling in this case). This means when a photo of you is tagged, you have to give your permission first before the tag will show up and go out to all your friends. I set the Custom one (3rd down) to only me, more private.

Note: The tagged photo of you will not be removed, you can remove it from your own timeline but not from the wall of the person that uploaded it. Only asking them to remove it or reporting it to Facebook will have it removed

To disable “Facial Recognition” or Suggestions Set to “No One” as the picture left shows.

How To Be A Responsible Tagger!

Etiquette on Facebook needs to include firstly not uploading pictures without express permission, and then not tagging people in your photos without permission. Don’t always assume just because someone is near you that they will be happy to have that photo uploaded to Facebook and be tagged.

Be careful of saying yes to a photo being uploaded to Facebook but only without tagging, because anyone can tag any photo of you if the permissions on that account allow it. Just because your friend says they won’t tag the photo, doesn’t mean another friend of your friend won’t. Another reason to have Auto Tagging turned off.

To be a good Facebook friend always select the right posting settings before posting a photo. You can post to “public”, or to “friends” or to “friends not acquaintances”. If you’re not sure don’t post it….or choose “friends” only.

If you have been tagged on a photo which you consider inappropriate or is abusive to you, and the person won’t remove the photo, you can report it to Facebook Here: